An ode to the Greeks of World War II Greece is a country which, if nothing else, is very proud of its history, raging since 2000 BC to the modern times it is more than 4000 years of development of culture, arts, political systems and philosophy and of course war, so it is very interesting that most Greeks who learn the history of their nation, most of the times tend to remember the Second World War rather than other major wars like the Balkan Wars, WWI and the Campaign in Asia Minor (1919-1922).

Greece, or the Kingdom of Greece as it was known back then, in the 1930s was a country in political and economic turmoil, the economic crisis of 1929 was still effecting the Greek society and the National division of 1917 (Εθνικός Διχασμός) between the monarchists (Φιλοβασιλικοί) and the liberals (Φιλελεύθεροι). After a lot of scheming from both sides and many coup attempts, the King Georgios II choose Ioannis Metaxas, a former military officer and politician to lead the country on the 13th of April 1936 as its Prime Minister after the tragic death of Prime Minister Konstantinos Demertzis. Metaxas was the real “game changer” for Greece, he guessed rightly that Greece would face a large amount of danger in the years to come and so he prepared the nation for what would be known in Greek history as the “Epic of Albania” (Έπος της Αλβανίας). 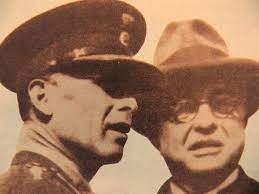 King George I of Hellenes and Prime Minister Metaxas.

Sun Tzu said in his book “The Art of War”: “If you know the enemy and know yourself, you need not fear the result of a hundred battles. If you know yourself but not the enemy, for every victory gained you will also suffer a defeat. If you know neither the enemy nor yourself, you will succumb in every battle.”. Metaxas knew the weaknesses and strengths of Greece, his first order of business was to reorganization the army and try to prevent any provocation that would put Greece in war situation with the Axis or the Allies, something that secretly would change in April 1939 when Metaxas signed a guarantee with France and the UK, effectively putting Greece in the side of the Allies, even if in September 1939 Metaxas declared Greece as neutral, he knew that the war was not so far, the events of 1940 would prove him right. In August 15 1940 at 8:25 am in the celebrations of the Feast of the Dormition of Theotokos, the Italian submarine Delfino unleased three torpedoes against the Greek protected cruiser Elli who was present there for the festivities, two of the torpedoes missed but the third hit the cruiser killing nine petty officers and sailors. This was a provocation of immerse magnitude, but Prime Minister Metaxas knew that a war with Italy would be a mistake at this time. In the night of the 28th of October at 03:00 a.m. the Italian ambassador, Emanuele Grazzi in Athens gave Metaxas the ultimatum for a Italian troops to move through Greece and occupy strategic positions in Greece, Metaxas looked at it and his response became a thing of legends: “Alors, c’est la guerre!” It was the day that marked a new chapter in Greek history, a glorious one. The light-cruiser Elli being hit by an Italian torpedo in August 1940.

Even before the ultimatum reached Metaxas, the Italian troops already started attacking the Greek positions of the VIII Infantry Division that guarded the Italian-Greek borders in Epirus, in the next days the inferior numerically Greeks would mobilize more than 500.000 men to reinforce their troops in the front. Greece in that time had around 14 infantry divisions, one cavalry division and 3 infantry brigades with almost no tanks and older artillery than its adversary, miniscule number of older fighters and bombers against more than 350 Italian planes and an almost obsolete navy with just one older cruiser, the legendary Georgios Averof, two modern and four slightly older Italian destroyers and four obsolete Aetos-class destroyers complemented by six old submarines. Papanikolis, the most successful Greek submarine of the Second World War.

In the first few weeks the Italians thanks to their best division, the 3rd Alpine Division Julia they managed to move several kilometers inside Greece, but it was a matter of time for the 9 italian divisions to stall their attack thanks to the fierce resistance of the Greek army. General Alexandros Papagos who was the Commander in Chief of the Hellenic Armed Forces prepared a plan to counterattack the Italians, he putted in motion in November 14th and by January he had pushed the Italians out of Greece and even capture most of Northern Epirus that was part of Albania back then, in November 23 Korytsa was liberated with the Greek population welcoming the troops in the city, also at the same time Pogradec fell and at December 8 Gjirokaster also fell into Greek hands and finally Himare on December 22nd. Back in Greece the initial fear of the first days of the war turned into national excitement and people rushed to join the army and fight for their fatherland. Metaxas became a national symbol of hope and struggle against the aggressive Italians who started believing that Greeks had some form of a new weapon! It was the first time in mainland Europe that the Axis faced such a defeat, forcing Mussolini to ask Hitler for German assistance in the Balkans. Hitler himself didn’t want to get involved with Greece or Yugoslavia, for what mattered the most to him was the incoming Operation Barbarossa against the Soviet Union, but he also knew that allowing Greece to secure its flanks with Allied support would result in allied bombers attacking the oil fields of Romania that were essential for the Third Reich.

On the 12th of February the Greek army captured the Klisura pass, and for a little time it felt like the numerically inferior Greeks will make more than 270.000 Italians to fall into the sea! Such was the level of success that the Greek Army was having in the Epirus Front. By that time Mussolini knew that the Italians need a clear victory before the Germans set in motion Operation Marita, so in 9th of March, watched by Mussolini himself, the Italians attacked the Greek positions in Epirus with massive bombardment of the Greek forces and resulted in the legendary Battle of Height 731, 100.000 sells hit a front of only 6 km long during 9-15 of March. The Italian attacks were many and the Greek counterattacks with the use of bayonets and the Greek war cry: “Aera!” (Αέρα!) were comparable to the 300 Spartans of King Leonidas, only this time they won, no matter what they did, Greek soldiers just refused to die by their enemy’s hand, their commander Dimitrios Kalsas order no retreat and every deserter was going to be shot, not a single soldier run for his life. After that the attack halted and Mussolini was furious with his generals for achieving a victory and costing him the lives of almost 12.000 dead and wounded.

By that time Hitler had enough of Mussolini and his “Greek fiasco” as he called it for the rest of the war, accusing him that he was the reason of the German defeat in Russia. On April 6th, 1940 the German troops crossed the Greek-Bulgarian borders and attacked the Metaxas line, a line of multilayered defenses, comparable to the Maginot line in France. It was built in case of an attack from Bulgaria by none other than Metaxas himself. The Germans attacked Greece and Yugoslavia with more than 680.000 men, while the British and the Commonwealth nations could only spare around 62.000 men. The balance of power was even worse if we understand that Metaxas line was built to be manned by at least 200.000 soldiers when they were no more than 70.000 to be spared there.

The German invasion in Greece.

Even so, the Greeks put up a hell of a fight against the Germans, in one occasion a sergeant named Dimitrios Itsios was fighting in a pillbox position and saw the Germans flanking his position, so he ordered his men to retreat and he stayed back with two of his friends to cover his men, he has been credited with the kill of more than 250 German soldiers using 38.000 rounds of ammunition, making the Germans believe they were fighting a whole division and so asked air support from the Luftwaffe! They only surrender after they had no more bullets to use, after that the German officer asked them: “Where is the army that was defending against me and who is in command?” and Itsios replied: “We are the army, and I am in command.” The German officer in shock tells him: “Congratulations soldier, you lived up to your ancestors spirit.” Itsios then replied: “I just did my duty.” And the officer replies: “And now I must do mine, congratulations. Execute him!” and so a man shot Itsios in cold blood. Let it be known that during the battle of Metaxa line the Germans lost almost 800 men in total, this means that Itsios killed almost 40% of all German casualties in a day, alone with an old machine gun, that’s a bad, bad motherfucker.

Despite the heroic resistance of the Greek Army, the Germans conquered Athens in 27th of April 1941. What follows is the battle of Crete, the last attempt of keeping a small piece of Greece free, but because of bad coordination, the Greek and Allied soldiers lost the strategic important airfields to the German paratroopers who lost 90% of their core, something that would become important in future operations.

The Battle of Crete, where Aussie, British, New Zealand’s and German soldiers fought with admirable bravery.

I know we all face difficulties in our lives in the recent years, the Coronavirus has greatly affects our lives, that doesn’t mean that we should forget an important message that “Ohi Day” sends, the message of never give up to those who want to take your freedom, the message that no matter who strong is an adversary, you can always overcome him and set an example, an example of excellence and pride for all the free world, that is why Greeks celebrate the day they entered the war, because it united them and gave them a purpose, something that is very important to this day.